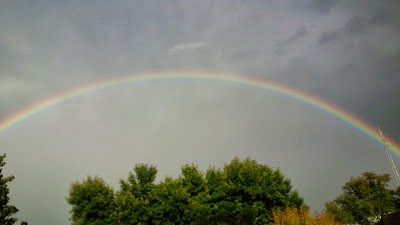 One day last summer, God painted the most glorious rainbow my eyes had ever seen! I scrambled for my camera in the hopes of saving this grandeur, but alas, my humble camera could not even come close to capturing what it really looked like. The colours were so vivid and as you can see it stretched clear across the sky. You could actually see it touch the ground in front of a row of trees. Here is my humble attempts at freezing this magnificent moment.

Yesterday as bus load of us were on the road to another colony to watch their young people perform a play, we were caught in a blizzard, which caused white out conditions at times - not pleasant at all. More like Les Misérables, which is the title of the drama we were to take in.  It's the story of Jean Valjean, an ex-convict who, inspired by a kindly bishop, decides to turn his life around. He eventually becomes mayor of a town in France and owner of a factory. However, he is always uneasy about being recaptured by police inspector, Javert who is ruthless in hunting down law-breakers, believing they cannot change for the better. One of his factory workers, Fantine, blames him for her being cast into a life of prostitution. When she dies, he feels responsible and agrees to take care of her only daughter, Cosette. However, he must first escape Javert. Later, when Cosette is grown, they are swept up in the political turmoil in France, which leads to the June Rebellion of France. It's a story of how love, kindness and forgiveness has eternal value, as opposed to hate and anger which lead to doom.

Enjoying this superbly acted play, was like the calm after the storm - a rainbow of sorts. Soon after the show began, the storm we traveled through was all but forgotten, as Victor Hugo and a group a fine actors transported us to France to get a glimpse of French history. Thanks to all who were involved in this production - you did an amazing job!

I was reminded of a song by the Harmony Quartet, God Put a Rainbow in the Clouds for Me


God put a Rainbow in the Clouds for me﻿

May God give you...
for every storm a rainbow,
for every tear a smile,
for every problem life sends, a faithful friend to share,
for every sigh a sweet song and an answer for each prayer.
Irish Blessing