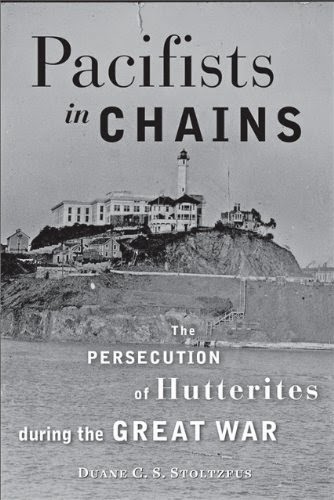 To Hutterites and members of other pacifist sects, serving the military in any way goes against the biblical commandment "thou shalt not kill" and Jesus’s admonition to turn the other cheek when confronted with violence. Pacifists in Chains tells the story of four young men—Joseph Hofer, Michael Hofer, David Hofer, and Jacob Wipf—who followed these beliefs and refused to perform military service in World War I. The men paid a steep price for their resistance, imprisoned in Alcatraz and Fort Leavenworth, where the two youngest died. The Hutterites buried the men as martyrs, citing mistreatment.

Using archival material, letters from the four men and others imprisoned during the war, and interviews with their descendants, Duane C. S. Stoltzfus explores the tension between a country preparing to enter into a world war and a people whose history of martyrdom for their pacifist beliefs goes back to their sixteenth-century Reformation beginnings. 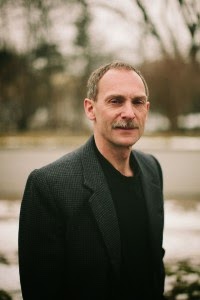 Duane C.S. Stoltzfus is a professor of communication at Goshen College and the copy editor of The Mennonite Quarterly Review. Before joining the faculty at Goshen College in 2000, he worked as a staff editor at The New York Times. Before that, he was a reporter and an editor for several newspapers in New York and New Jersey.
His writing has appeared in The New York Times, The Indianapolis Star, American Journalism, Newspaper Research Journal, Media Ethics and The Common Review.

He is also the author of Freedom From Advertising: E.W. Scripps’s Chicago Experiment (University of Illinois Press, 2007). He lives in Goshen, Ind.

Initially, I wasn't reading this book to review, however, before I was half way through, I felt strongly compelled to tell the world about it. Then I had the opportunity to attend a book signing and listened to Duane and others talk about this heart-wrenching story, which sealed my resolve to share "Pacifists in Chains" with my readers. Which I should have thought of doing so, in the first place, alone on the basis that this story is a horrific chapter from of my own Hutterite history, and it bears telling.

This narrative is well-researched, richly detailed and has an amazing amount of background information - all of which helps the reader get a better understanding of the complexities of this terribly sad, but true story. The various perspectives the author presents, enhances this historic account, giving it depth while creating interesting angles and a broader view of that particular era. 'The nation was going to war with one-third of  Americans having been born overseas or being the child of an immigrant and with one of every five soldiers having been born overseas.'  Turned out, that history was repeating itself for some of those children of immigrants, just like their forefathers in Europe, their faith was being severely tested in their relatively new homeland.

The letters included in this book, provide not only authenticity but also poignancy. The voices of the three Hofer brothers and Jacob Wipf , draw you into the story and enable you to get a feeling of their love and concern for family and community, their emotional state, and their firm faith in God, even though the letters were censored. Their longing to be with their loved ones is evident in every letter, but they believed that will likely not happen in this life. For two of the four, that was true; they came home in a coffin.

The book is written in such a fashion that it gets the reader thinking about how perhaps things could have gone differently, on a number of levels, including the timing of some events that closed a door for them: Shortly after the four Hutterites arrived at Camp Lewis, and were sent to the guardhouse for refusing to obey orders, the furlough program was approved. Because they were awaiting trial this opportunity came to late for them. One cannot help but wonder if their treatment had been less harsh, had they agreed to work during imprisonment, as some other conscientious did: After being court-martialed, one Mennonite decided to work, reasoning that 'he was no longer a soldier' and the work at Leavenworth did not include services in support of the war. That being said, it's likely the Hutterites were also strongly opposed to supporting any organization that would use torture methods on fellow human beings who, because of their faith, dared to take a stand against war.

I highly recommend this book to anyone who is interested in WWI history and the unsung brave souls who steadfastly endured horrendous torture and deplorable living conditions all because their conscience would not allow them to kill fellow human beings.

This book is available at HB Book Center, Amazon,  and McNally Robison in Winnipeg.
Posted by Hutt-Write Voice