“Without words, without writing and without books there would be no history,


there could be no concept of humanity.”

It all started with a challenge at a German Teachers two-day Conference in autumn of 2017. On the back of the program was an excerpt of a letter penned in the late 1800’s. It was written in the old German script known as Sitterling and which has not been used in Germany for many years. The Hutterites were likely the last people to use it. Most of our sermons are in that script and some people have hand-written song books as well. Sitterling is still taught in many Hutterite colony schools today. Even though we don’t use it much in our school anymore, I can still read and write it, which proves to be useful when encountering copies of important historical books.

At the conference one of the organizers put out the challenge: “Try to decipher the letter at the back of the program. You have to be able to tell me the main purpose of the letter and name some key people involved. There will be a book prize.”

I rose to the challenge, not so much because I wanted the book, (OK, fine. I wanted the book,  too:) but more because I love wrestling with language; and this one proved to be quite a head-scratcher. Thus, I spent every spare minute during breaks trying to make sense of the letter excerpt, as it had to be handed in by the end of the conference. Later in the day, I learned my friend, Dora was also working on it. When we both got stuck, we decided to collaborate, since we were doing this more for the fun, and wouldn’t be upset if we didn’t get the book. We handed in our paper and told the organizer we had worked on it as a team. He didn’t mind and told us we’d both get a book. Turns out, we were the only ones who completed the challenge.

A month or so later I got an email from the same organizer:


Would you be interested in a Christmas break project? I recently got a scanned copy of Paul Tschetter’s diary and I would like to work with it, but it takes me too long to work with the script, plus his handwriting. It has a total of 56 pages. Believe it or not, it appears this has not yet been done!


Of course I agreed, even though I knew it would be a daunting task and would be more than a “Christmas break project”. Plus, I’d long been intrigued by the story where Paul and Lorenz Tschetter set off from Russia in search of a new home in America, for the Hutterites. Thus, I started transcribing as soon as I got my copy of the diary and found it interesting that it started with a thirteen stanza song, written by Paul Tschetter. I soon learned, Paul included a number of his songs about his travels in his journal. For example, when he got to Chicago he wrote a song about this city and the fire that destroyed most of it. His take on that disaster was, that God punished the wicked city. Most of these songs have never been published, therefore have never been sung by Hutterites, unlike so many of our forefather’s songs, which we have in a song book. 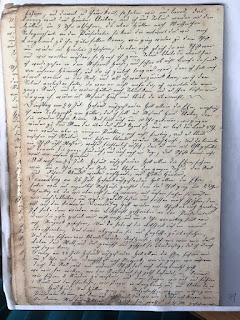 As I labour over this document, I’m reminded of the different skills it requires: First, I need to be able to read the old German Sitterling script. I quickly learned that it works best to study the handwriting carefully; get used to how the writer formed certain letters, and take note of the lack of punctuation. A good grasp of German and a substantial vocabulary is also essential. I have to be aware that German, like most languages, has changed over the years, and there are words that are no longer in use today. It also helps to know how sentence structure today differs from how it was centuries ago. Besides all that, I love the challenge of "language puzzles", a key ingredient for such an undertaking.


While I’m transcribing I wonder why Paul Tschetter rarely mentions his uncle Lorenz Tschetter who is traveling with him. Doesn’t he like his company? Or perhaps they don’t see eye to eye on some things. It just seems strange that the two traveling companions would not do more things together. Or maybe they are and Paul simply chose not to mention his uncle too much in his journal.


Paul Tschetter seems to be a fascinating character. His passion, determination and Anabaptist values come through on almost every page. These are especially obvious in his reflections and description of events. Paul spent a lot of time among the Mennonites who had settled in America earlier. Sometimes that included attending church services, and since Paul was a minister he sat in the front, and was occasionally asked to lead the service.


He clearly was not impressed that some Mennonite ministers had an evangelistic approach when delivering a sermon. One Sunday service in particular left him “bewildered” and he felt the urge to run from the church. “The minister marched back and forth behind the pulpit, as if he was insane.” Paul wrote. “He hammered on the pulpit with his fist and pointing to his heart he cried, ‘Herein must the Lord live.’ Sometimes he praised us to heaven and then again he damned us all into hell.” Having listened to Hutterite sermons my whole life, I can understand Paul’s bewilderment; our church services are still never conducted in such a dramatic fashion, instead, they’re read with a calm and strong assurance. 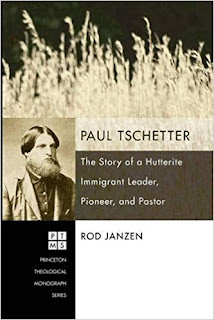 To glean some insight on this story, I read Paul Tschetter: The Story of a Hutterite Immigrant Leader, Pioneer, and Pastor by Rod Janzen. It’s a valuable resource, as it not only sheds light on this time in Hutterite history, but includes most of Paul’s diary. This is especially beneficial when I get to parts that are difficult to read due to fading ink. Reading this translated version of the diary, however, I wonder why some parts are missing? Did the translator not deem them important enough to include?


Transcribing this diary is a long, slow process. Since I don’t know of an easier way to do this, I’m copying it by hand first. I have to use a magnifier, so the document has to lie flat on the table, and even so, I sometimes have to look very closely to decipher some words and phrases. So typing while doing all that would be even more cumbersome.


I’ve long been interested in this fascinating story, now I not only get to read the book, but also get a close look at Paul’s diary. When Paul, a former Lehrerleut member, embarked on this journey, his group was no longer living communally, but rather in villages like the Mennonites. However, they were still using the same language, the same sermons, and had many of the same beliefs as the communal Hutterite.


Paul’s diary and also the book mentioned earlier, are important documents for Hutterites; as far as I know, none of the communal Hutterites kept a journal of immigrating to America. Even though I knew Paul no longer lived communally when he wrote the diary, I could easily picture him as a communal Hutterite. He still dressed as one and had many of the same values; and his views often reminded me of an older Hutterite minister, even though he wasn’t that old. Additionally, all Hutterites left Russia within a few years, so they most likely had similar experiences.

I'm always fascinated when I read a book and an old diary is part of the narrative. How about you, have you ever had a chance to read an old diary?