(Just want to clarify when I say ‘today’ in a post, it may well be a few days ago. When I don’t have internet excess, I write/save the posts to publish later. I’d love to post daily, but it just can’t be done. So, just enjoy whenever it is you get them.)


Today was a holiday here in Sued Tirol, Mary’s Ascension Day, so while everybody else was observing that, we had Hutter Day. No, I didn’t just invent a holiday, but that’s what it felt like with all the Hutter related places we toured today. 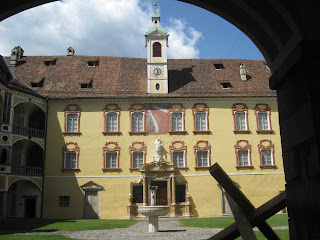 One of the places we saw today was the Bishof Residenz. It’s a big palace, (you see only part of it here) but we were not able to go inside. Quite a contrast, knowing how the peasants were treated compared to how the Bishop at the time lived, which ultimately led to the Peasant's Revolt. 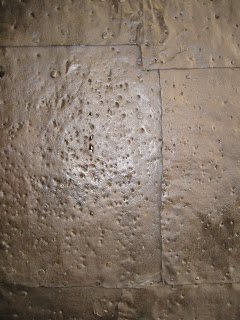 This gate just outside this grand Palace is where the peasants banged and hammered, wanting to be heard. As you can see the marks are still there, helping to tell this story.  It's assumed that Jakob Hutter was a part of this, and is where he learned that using violence to emphasize a point is never a good idea, as it doesn't accomplish anything. 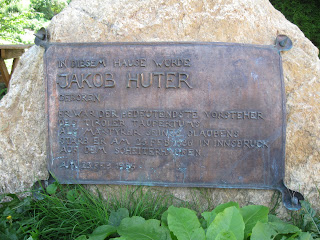 We visited the place where Jakob Hutter was born. The house is not there anymore, as it burned down some years ago and another has been built in its place. But close to where it was, there’s a plaque on a stone to commemorate this birthplace. It’s privately owned property, so we just took some pictures and left. The people living there are kind enough to allow these Hutterite visits from time to time. I’m so grateful to the people who put up these plaques! 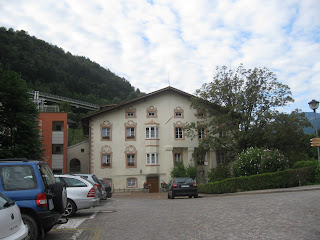 This house in Klausen is where Jakob and Katharina Hutter were captured. The people living in the home sympathized with the Anabaptists and assisted them sometimes, knowing it could cost them their lives. 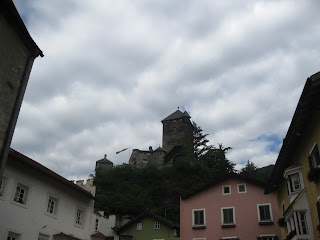 They were taken to Schloss Branzoll, (in the background) where they stayed only a few days. 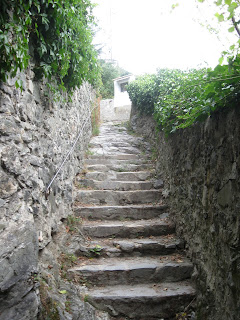 In all the castles we've seen, there are MANY with stairs like these, leading to the top. Not an easy climb, but so worthwhile, not only for the view from there, but also to stay there for a while and reflect on the stories. 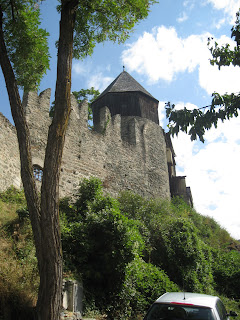 Jakob was taken to Innsbruck and Katharina to Schloss Summersberg in Guffidaun. She was pregnant at the time and when her baby was born, they took it from her and placed it in a Catholic home, ‘so that it doesn’t end up in hell’. The baby was never heard of again. Nobody even knows whether it was a boy or girl. Horrible enough to be separated from her husband and not knowing what will become of both her and him, they had to take her baby as well. Sometime later, someone helped Katharina escape. Two years later though, she was recaptured, kept at Schloss Schoeneck where she was drowned in a water trough. As I said in an earlier post, Jakob Hutter was burned at the stake in Innsbruck. 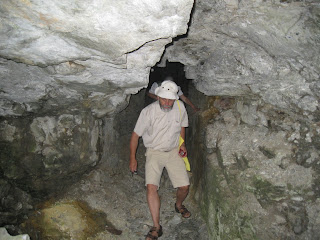 Robert Hochgruberm our tour guide
﻿
These caves are also in Guffidaun. That’s where the first Anabaptists met for worship or hid from their enemies. Really gave me something to think about, while we’re free to worship in big comfortable churches, our forefathers gathered in caves. 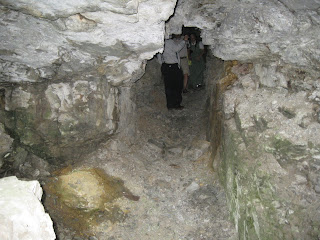