Sued Tirol, Italy - with the Robert and Martha Hochgruber Family 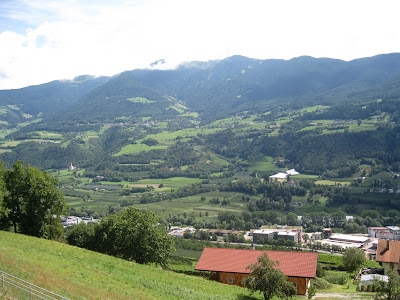 I got up this morning to the sound of church bells. (I think I’m going to miss this sound when we leave here.) Another sound that made me smile very early, was a rooster. I can’t remember the last time I heard one in the morning, even though I live on a farm – our poor roosters don’t get to wake people.


Not only do I have a room with a view here in Tschoetsch, but it has a balcony as well, where I can sit and soak up this grand scene. So this is where I did my morning devotions. Ever so often I would look up and think of Jakob Hutter and his wife, Katrina walking, well fleeing actually, in the mountains you see in this picture. They traveled from St. Lorenzen (left) to Klausen (right)where they were both captured.


The first day we arrived in Sued Tirol, we were welcomed by our hosts Robert and Martha Hochgruber, their daughter, Edith, son-in-law, Matthias and their cute children, Simon and Nina. They prepared a typical Italian meal for us: noodle and spaghetti sauce along with a two kinds of salad. This we enjoyed on their balcony also overlooking the grand scene in the photo. Sometimes it seems I’m dreaming. 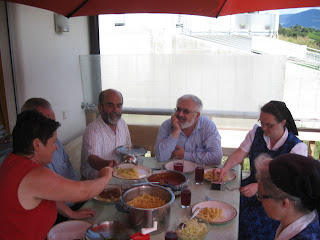 In the afternoon Robert and Martha took us to see the St. Lorenzen church where Jakob Hutter was baptised as a child. Later, of course he left that church when he joined the Anabaptist movement. We also saw Michaelsburg where many Anabaptists were imprisoned; also in this area many were tortured.


We visited some friends that Jack and Kathy stayed with 22 years ago, Hans and Erika Hellweger and their family. We didn’t phone ahead that we’re coming, so you can imagine their surprise. Erica especially could not get over the fact that after all those years her dear Decker friends were back. It’s been a long time since I’ve seen such joy, at times it seemed she didn’t know whether to laugh or cry. They also treated the rest of us like long lost friends. I walked around the yard with Erica and she held on to my arm, tears trickling down her cheeks, said, “Das ist ein Geschenk, dass ihr hier seid. Wenn ihr wieder weg sind da kann ich tuechtig weinen. Vor Freude. So lange habe ich die Hutterer nicht gesehen! (This is a gift that you’re here. Wenn you leave I can cry in earnest, tears of joy. It’s been so long since I’ve seen Hutterites.)


Later we visited more friends of Jack and Kathy - this time Heinz Mariner and his son Andy. Heinz generously invited us to a restaurant in the area. I know, looks like every time we turn around someone is offering us food, which of course we can’t refuse. It’s a blessing to make so many friends in Europe!!


Tomorrow we’ll be visiting a number of places from the Jakob Hutter story – another incredibly sad account.
Posted by Hutt-Write Voice