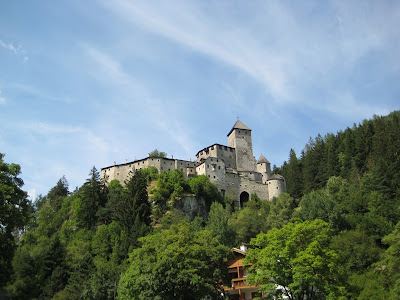 This is the place where Hans Krael was imprisoned in 1557. Once again, was quite a climb to get to the top – really taxing on our muscles that are just used to the our flat prairies. (:
The conditions at this Schloss were horrible, besides being tortured, to get Hans to renounce his faith, the dungeon where he was kept was very dark and damp and infested with insects and rodents.
Our tour guide was quite a character, and seemed quite pleased that he had Hutterer in his group. After introducing himself he told us how long he’s been doing this and ‘mostly people ask the same questions but my answers change every year.’ Then he paused to gauge our reaction it seemed and continued, “For example, if you should ask me how old this castle is, my answer changes from year to year.” 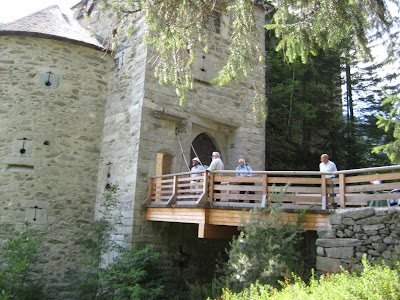 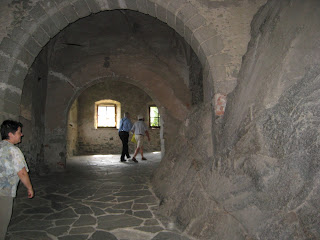 Inside the Schloss, Robert (up ahead with Sam) and Martha (to the left) were
our hosts and took us to many Hutterite History related places in this area.

,Because we’re Hutterites our guide also showed us the dungeon where Krael was kept, which is usually not open to the public, because that part of the castle is deemed unsafe. We were not able to go right down into the dungeon, but were able to stand at the opening and take pictures.

Here again, our host took some time to read the story from our Geschichtbuch. 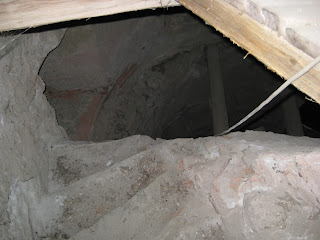 His greatest sorrow was that no messages got through to him from the church.  At that time Hans Mändel, a servant of the Lord’s Word, was in the mountains of .  He had a great longing for news from Hans Kräl and got word to him in the dungeon, asking him to send some sign that he was still faithful to God and his church.  If he had nothing else, he should send a little bundle of straw.  Hans Kräl would gladly have done so, but he did not even have so much as a bundle of straw in the dungeon.  That is how poor he was.  Then he remembered the collar of his rotted shirt, which he had hung on the wall, and glad that he had it, he took it down and sent it to the brothers as a sign that he was at peace with God and the church.  When they received the collar and saw how destitute he was, it went to their hearts and they wept out of pity for him.  They sent a message back to him in the dungeon that they would be more than happy to send him a shirt or anything else, if only they knew how.  But he did not want them to try, because if it were discovered he would be tortured again and those who brought it would have to suffer.  So he let them know that they should not send him anything.  He must clothe himself with the garment of patience. (The Chronicle of the Hutterian Brethren V1)

Hans Krael, sometimes named Kitzbuechel for the place he was born at, was elder from 1578 to 1583. He died at Neumuehl, Slovakia at the age of 63. 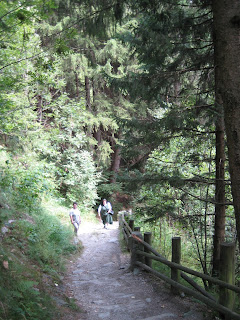 Elma and Martha Hochgruber making their way up. 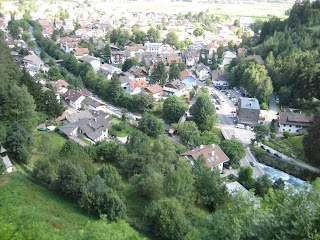