Hello from Switzerland - Home of the Grossmuenster

I'm excited to post from the other side of the ocean!! And I'm pretty sure you're all eagerly awaiting news from Europe. We had a mostly good flight, for over an hour there was turbulence, but the captain assured us that 'it's not unusual, that the aircraft can take it and the good news is that  this Jetstream turbulence is helping to push us'. I don't know how he was looking at this but the good news for me, was that the aircraft can take. Didn't really care about the push, but it must have worked, we arrived 15 minutes ahead of schedule:) The landing was a huge pain in the ears!! I love takeoff! But landings not so much. But I guess one has to come down... ﻿

It was great to have our friends, Manuela Schmied and Raymond Pittit meet us at the Zurich airport. They didn't know each other before this and were not aware that they're waiting for the same people. Elma and I went to have breakfast and to visit with Manuela, while Jack, Sam and Kathy went to Raymond's home. Later Manuela, took Elma and me to Raymond's house by train as well, before returning home. After sort of resting, Raymond gave us a tour through the old part of Zurich (3,500 years old). 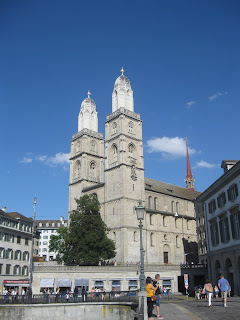 Didn't get any sleep on the flight. Apparently there's more to sleeping than the blanket and little pillow they give you...like being able to lie down. Ironically enough, ones I was able to lie down in our Bed and Breakfast, sleep wouldn't come either, even though half my body was screaming for it. But hey, I'll gladly take a few sleepless nights for this amazing experience of traveling in Europe!

We spent most of our tour with Raymond at Grossmuenster. Here is where the Anabaptist movement started, when during 1525 Ulrich Zwingli preached straight from the Bible, defying the state controlled church to follow Jesus' teachings instead. He played a huge roll in reforming the church of that time in Switzerland. At first he agreed with many things that Anabaptists wanted reformed, but than he changed his mind because he was unwilling to pay the price of what it would cost him, if church and state would be separated. He also never took a stand against infant baptism as did other Reformers.

Here is a brief history of Grossmuenster. 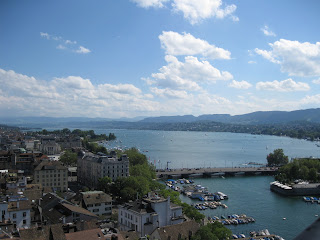 We climbed (and panted) our way up the staircase inside Grossmuenster, all 187 steps. (Wouldn't recommend it on limited sleep) but I'm so glad I did!! The view is breathtaking!

This is the Limmat River,  where Felix Manz, one of the founders and first martyr of the original Swiss Brethren congregation in Zürich, Switzerland was drowned, because of his faith. 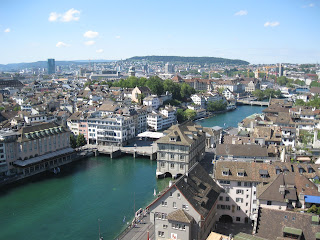 Also taken from the top of Grossmuenster 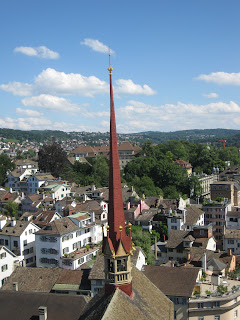 Raymond prepared a lovely supper for us after the tour. Now, I have to try to get some sleep. Stay tuned, tomorrow we head to Austria...