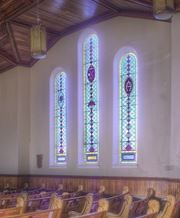 Last spring my nephew, Jakobi won first place in the Kindergarten category of a poetry festival. Each child
who entered, recited a poem for an adjudicator, and if chosen as top in his/her class was asked to come to perform the piece at the Gala Performance, and received a prize. This is always an exciting time for students, parents and teachers alike.

The Gala event was held at the Trinity United Church in Portage la Prairie; an older building with beautiful stained glass windows. After the performances the students all gathered on stage so that everybody who wanted to, could capture the moment on camera. I took a few... well OK, a lot of pictures myself. Most turned out well; however, there's this rather blurry one, where Jakobi's comical expression seems to say he's done with this photo op. Nevertheless he dutifully stayed until everybody was done. Jakobi's five-year old mind usually has a lot of questions and one of them that night was, "Why doesn't our church have windows like this?"


Indeed. Why doesn't our church have stained glass windows? The answer can probably be traced back to our forefather's time in Europe when they bravely stood up against many aspects of the Catholic church of the day. One of the things the Anabaptists were opposed to, was elaborate cathedrals. Living in an era where peasants had an extremely hard life, with barely enough to feed their families, they were appalled how money that could have helped the poor, was used to build expensive churches. For the peasants fancy churches signified the injustices that were part of their daily existence. Some of the twelve Articles put forth by the peasants during the 1524 German Peasant Revolt were points that today fall under human rights:

Today Hutterite churches are in some ways still simple. However, upholstered pews, surrounded by vaulted ceilings and arched windows, and illuminated with decorative light fixtures strongly suggest that we're leaning towards luxurious. I know some would argue that we have the right to enjoy big beautiful buildings, after all we worked for them. However, is it right to live lavishly, while millions of "the least of these" suffer injustices in many areas of the world? What do our "cathedrals" signify for people who don't know where their next meal will come from?

Jakobi's question regarding stained glass windows also reminded me of one section in Hutterite Diaries. While I was working on my book, my editor suggested a frequently asked questions chapter. I wasn't overly excited about that, because I wasn't convinced that readers would find such a chapter interesting or helpful. Even though I knew that's a personal preference, and other people may feel entirely different, I still felt reluctant about adding such a section to my book. However, my editor strongly, but kindly kept pointing out that people really do see value in this part of a book. Furthermore, since Hutterite Diaries is part of a series, Herald Press wanted to stay consistent with the format used in the other books. Thus, I agreed and with the help of my editor, and some Hutterite friends, came up with questions, and then wrote answers for them. I've since changed my mind about FAQ. Through feedback from readers I've learned that they not only enjoyed this section, but learned from it as well.

I started out writing this post about the FAQ in Hutterite Diaries, but then it morphed into something I wasn't expecting. Like my mind was meandering in many different directions as I was writing. While revising the post I clearly heard Valerie, my Herald Press editor saying, "I think this chapter is trying to do too much." But I decided I'd leave it as is, because having a post take on a life of its own, so to speak, doesn't happen to me very often. My apologies if indeed it's just too confusing.

But back to the topic which inspired this post, FAQ: If you had been given the chance to ask me a question regarding Hutterites, to add to my book, what would you have asked? Please respond to this question, even if you're a Hutterite. Perhaps you can share questions that you have been asked by tourists or non-Hutterite friends and acquaintances. I'm hoping your questions will inspire future posts. In any case, I will answer your questions, either in the comments or, as I've said, in a future post.

Feel free to comment on anything I've said in this trying-to-do-too-much post, even that you agree with Valerie. (:
Posted by Hutt-Write Voice