Hutterisch – the Mother Tongue of Hutterites

Hutterites speak a Carintian German dialect, originating from the province of Carinthia in Austria, which we fondly call Hutterisch. This language is spoken on a daily basis. However, it’s unfortunately generously sprinkled with English words as well. Some of this cannot be altered as there are numerous things for which we have no Hutterisch word. These include, farm equipment, mechanical parts, cooking ingredients, medicines, and some kitchen utensils.


All Hutterites speak Hutterisch, although there are dialect shifts and various lilts and other interesting nuances from colony to colony. This is even more evident among the three groups, Schmiedenleut, Dariusleut and Lehrerleut; e.g. one group uses certain words that the others don’t even know. Would be interesting to know where they learned those words, given the fact that our history is the same. But, perhaps the better question would be, how did the other groups lose them?
Hutterisch is for the most part an oral language tradition. Yes, people do sometimes attempt to write it, in notes, text messages and emails. However, with no standard spelling system these can be quite challenging to read, with a confusing and often amusing mix of Hutterisch and English sounds, dialect shifts and everything in between. Still, I appreciate every attempt at Hutterisch communication in the written form and relish the challenge of deciphering them. 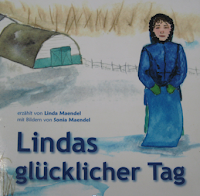 When I worked on my German children’s book, ‘Lindas glueklicher Tag’, (Linda’s Happy Day) a German language consultant suggested I change all dialogue to Hutterisch to make it more authentic. Initially, this sounded like such an odd concept and which I wanted no part of. One of my arguments, “Ours is not a written language,” did not change this consultant’s mind.


“Then make it a written language.” He stated nonchalantly. Easier said than done, I soon learned. In hindsight though, I do not regret this decision and both Hutterite and other German speaking people don’t have as much trouble reading it, than I initially thought. This probably opened the door to another interesting project I was a part of a few years ago. 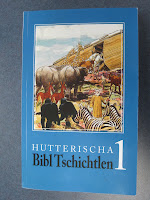 We were approached by Dick Mueller, a Wycliffe Bible Translator/Linguist, asking if we’d be interested in translating a set of children’s Bible stories into our language. This was a long, tedious process, but worthwhile in the end – three books in this set of five are now published and available on Amazon and HB Book Centre. These books are especially enjoyed by young children, since Hutterisch is the only language they know. Each book comes with a CD. assessment. When I was in Germany and introduced myself as Canadian, someone asked me, “But, why don’t you have an accent?” Of course the answer is that ours is a German dialect.

While we were working on these books, we collected all the words in a special Wycliffe computer program and have since kept adding to the collection. This is not going anywhere fast, but we’re hoping to one day have a Hutterisch dictionary.

As mentioned before, Hutterisch originates from Austria, the land of our forefathers. A few years ago I had the opportunity to visit this beautiful country. I was grateful to visit friends and see an historical place – das Goldene Dachl, in Innsbruck, where Jakob Hutter was burned at the stake in 1526. I especially appreciated speaking my mother tongue with non-Hutterites. Of course, listening to this dialect in Austria has more High German than ours. Nonetheless, we could communicate and understand each other, which, for me was priceless!

I always find it interesting what people say about our accent when speaking English. Most often they can not figure out what it is, saying that it doesn’t sound like a German accent. Listening to Germans speak English, I’d have to agree with that
Quite frequently we hear that our accent has an Irish lilt to it. After a recent conversation, someone told me, “The sound of your voice reminded me of a couple of friends I have in Europe, Estonia to be precise.  You have a Baltic lilt to your voice.”
If you’ve ever heard a Hutterite speak, I’d love to hear your thoughts!
Posted by Hutt-Write Voice