A Peaches and Cream Mother’s Day 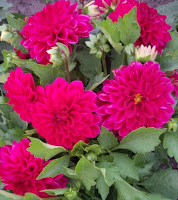 In honour of Mother's Day, I'll post a chapter from Hutterite Diaries. This is still my most hilarious Mother's Day memory, ever. Actually, I can't remember any communal celebration that garnered so many laughs.


Behind all your stories is always your mother's story.
Because hers is where yours begins.” – Mitch Albom

It was a lovely Mother’s Day, with the sun pouring down her golden blessings. Sunlight streamed through the windows of the communal kitchen where the people were gathered. As is customary on a Hutterite colony, we were anticipating a beautifully prepared Sunday dinner: noodle soup, roast duck stuffed with Sauerkraut, steamed carrots, salad, potatoes and fruit pizza for dessert.

Most adults were already seated, waiting for the few still getting their plates. The children, who had eaten earlier, were in the Essnschuel, children’s dining room, waiting for their cue to enter to sing some special Mother’s Day songs.  Some women, including my mother, were still at the smorg table in the kitchen area, filling their plates. On kitchen duty that week, I was there as well.

“Is there salad dressing in the fridge?” Mom asked.

“Probably,” I answered without looking up from the mountain of dishes in front of me that I wanted to get cleaned and moved to their place on the shelf.

She entered the walk-in refrigerator to look for it. Not finding it on the bottom shelves where it usually sat, she spotted a gallon-sized salad dressing container on the top shelf. That must be it, she thought to herself. But on a Hutterite colony, reusing containers is as normal as eating bread. Thus, the salad dressing container was being reused for cream, and its lid had been screwed on haphazardly.

Reaching up and pulling it toward herself, she received a cool, creamy baptism. Nobody witnessed it. For a few minutes she stood rooted to the spot, as she tried to decide how to deal with this mess. But with no water or dishrags in sight she knew there was just one option left. I wonder if I could slip out without being detected.

Meanwhile, I was still busy at the sink. My mind meandered back to another Mother’s Day – one I didn’t enjoy so much. I was cooking that time as well. The evening before, I had baked a cherry cake for each mom on the colony. My sister and I were doing this together and we really wanted this to be special cake. While she got the cake pans ready, I measured out the ingredients and mixed them together. Something didn’t seem quite right with the dough; it was rather thick. But we filled the pans anyway, not too bothered. Plus, there wasn’t anything that could be done at that point. After watching it in the oven, though, we knew there was something seriously wrong. The cakes didn’t rise properly and it took longer than usual to bake them. Lifting the pans out of the oven my heart was as heavy as the cake and visions of presenting the colony moms with special cake flew out the window. There was nothing fluffy and light about this cake. It was stiff and heavy; like a water-logged floral sponge.

It was an extremely long night of tossing and turning and beating myself up, as I was the one who mixed it. I must have done something wrong when I measured the flour, or maybe the baking powder. Too many eggs? Endless possible mistakes swirled around inside my head, like the big mixer in the bakery. No amount of trying to figure out what went wrong changed the fact that on Mother’s Day, of all the days in the year, these dear ladies would get brick cake.

Mercifully the night ended, but with the dawn came the realization that I’d have to face a bunch of moms who had been anticipating perfectly baked cherry cake. The mood at lunch was stilted, full of unnerving polite or sympathetic smiles, which did nothing for the disappointment and regret knotted in my stomach. “It doesn’t taste so bad, Linda.” One sweet mom offered generously; “Just a bit heavy.” Right, I’m pretty sure not even the birds would eat it, I thought glumly. I just wanted this day to end and forget that I even tried to make it cherry-cake special.

I was pulled from my not-so-pleasant memories by movement at the walk-in refrigerator. Very cautiously Mom opened the door and peeked out to see who all was still in the kitchen, while hoping that most had gone to the dining room. Grateful that there were only a few women, she ventured out; peering over the top of her cream-splashed glasses, and was met with peals of laughter. In the dining room, meanwhile, everyone was quietly waiting for grace when the laughter erupted. Questioning eyes were drawn towards the kitchen doorway, wanting to know what the joke was.

Hurrying towards the sink, with cream cascading down her face, dripping from her black and white kerchief, and streaming down the front of her black church jacket, she resembled a mischievous cat. Struggling to keep from laughing, I managed to wipe most of it off, knowing this image would stay with me for many years. The crowning touch came when I heard, “Peaches and cream!” from a chuckling elderly lady, who added, “Happy Mother’s Day!"

As for the special cake that never happened, its sting of disappointed lingered for a while, but in its wake I came away a bit wiser. I was reminded that there will most likely be more culinary calamities in my future. I chalked it up as a character-building moment and accepted the fact that everybody makes mistakes. Life tends to dish out disappointments that we have to deal with. They’re the perfect ingredients to help us learn and grow. As Mom would say, “Durch Schodn weat mir klueg, ober nit reich.” (Adversity makes us wise, but not rich.)