Ole, The Saga of a Norwegian Immigrant in America - Verlyn Hofer

Last spring, I reviewed another book, The Maverick Hutterite by Verlyn Hofer. It was also an historical account, but of the other side of his family. My sincere thanks to Verlyn and his grandson, Jordan for giving me the opportunity to read and review this book. 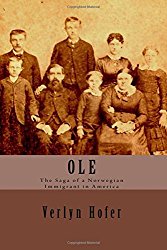 Ole Ulberg was just eight years old when he boarded a sailing vessel, along with his family and nearly four hundred other emigrants, bound for the North American continent in 1868. Too poor to afford passage on a steamship, this was the only way the Ulberg family could manage to begin their quest from Norway to their promised land of America. Thus began the saga of Ole Ulberg. A young boy, stunted in growth, but remarkably quick-witted and hungry for adventure, Ole’s journey crosses oceans, continents, languages, cultures, and vast wildernesses of his times.

In a quest for a better life in America, Ole and his family must endure many hardships. From a shipwreck in Ireland, a journey by train across a continent, and settling a homestead on the open prairie of Dakota Territory – the story is not one of ease and comfort. Ole’s story is certainly unique. But in a broader sense, he was representative of a tough breed people who were willing to work, suffer, and accept challenges in their quest to realize the promise of America for themselves and their families. Life, liberty, and the pursuit of happiness were not mere slogans, but rather ideals to be earned, lived, and passed down to future generations.

An excerpt from the Afterward sums up my thoughts about this book nicely:  It is a treasure for our family history, a chronicle of our local history, and an important contribution to the historical record of our nation’s development. There are many families that have a similar history and who would be able to draw comparisons with Ole’s story. There are most likely many who’ve heard only bits and pieces of their ancestor’s history about homesteading on the Prairies. This book can help shed some light on how things were back then.

I couldn’t help admiring Ole for his drive, courage and commitment to his family, even though that sometimes meant he had to disagree with his set-in-his-ways father. This fact was highlighted, when they had their first telephone installed in their home. Ole made a special trip to town just to call home to see how it would work. Everybody was excited, except for Andrias, Ole’s dad, who lived with them. When they handed the phone to him and Ole’s voice greeted him, he yelled, “Beelzebub.” He was convinced that this new contraption was of the devil. I found this hilarious, and could relate, as there are similar stories of not excepting change, in my own family’s history.

Obviously, Verlyn Hofer had to do a lot of research for this book. It’s also enhanced by stories passed on to him by previous generations and a selection of family photos. I recommend this book to anyone who is interested in the history of homesteading on the wild Prairies. It paints vivid pictures of the struggles and endless hardships just to eke out a living for their large families. I can’t even imagine living in a one-room sod house with a number of children, especially thinking of the harsh winters when more time had to be spent indoors. That in itself must have been challenging and uncomfortable. You have to admire those early settlers for all they had to endure while raising large families and taming the wild lands of the pioneers. And people, like Verlyn, who took the time to document this remarkable history for future generations to enjoy and learn from.
Posted by Hutt-Write Voice