My Sheep Know My Voice 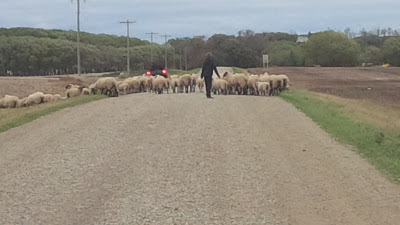 Earlier this week I was traveling in the Brandon, Manitoba area - a gorgeous drive this time of year, with the last traces of autumn colours decorating the rolling hills!

As we (my brother and I) got to the top of one of those hills, we were taken by surprise and had to stop abruptly. Right in front of us were Hutterite boys happily herding their sheep.  This is a sight I don't see every day, so I savoured the moment, as we slowly followed behind them, till they allowed us to pass, after a few minutes. We stopped to talk with the shepherds and they told us that the sheep had been out in 'greener pastures' for the summer and they were bringing them home for the winter.

I found it amusing that the guy on the four-wheeler in the front had a pail of grain and was scattering it on the road, in the hopes the sheep would follow him. In the few minutes I had to take in this scene, most of the sheep didn't seem to notice, or care about this follow-me-trick-and-treat. The two boys behind were busy trying to keep the sheep on the road, as they were more interested in the last blades of green grass of the season in the ditch. I wondered what happened to the age old 'my sheep know my voice' technique. Do these Hutterite shepherds even know that sheep follow the voice of their shepherd? Or perhaps the shepherd hadn't been talking... or singing to his sheep. In any case, their sheep herding technique worked, too. About fifteen minutes later, while visiting at their colony, I saw the sheep scampering to their shed in the valley.


I was reminded of this song, "My Sheep Know My Voice'.