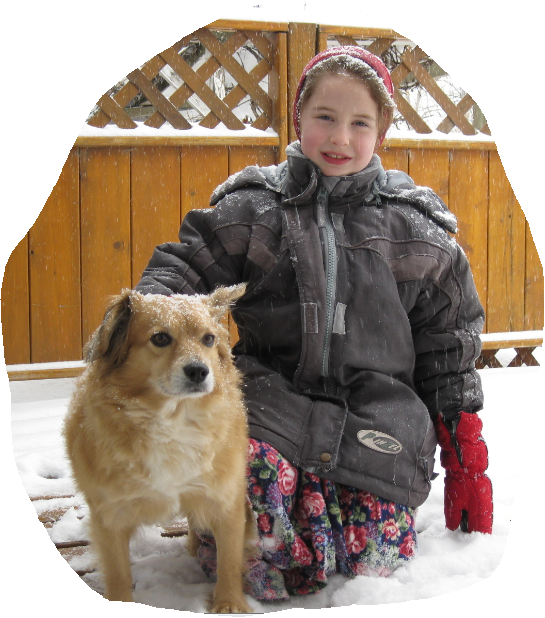 I love this picture - snow covered and rosy-cheeked! It was taken on our back porch a few winters ago. We still have the dog, Rusty (and he still doesn't know he's a dog.) and Daria, now in grade seven, is not so small anymore. And she's still a regular visitor at our house - and always takes time to scratch Rusty. But reminds us, that their dog, Muffy is cuter, much cuter! My sister always babysat her, when she was younger, so she sees my mom as her grandma. We always think that is rather sweet, especially since both her grandmothers are no longer with us. My sisters and I never became her 'aunties', though - no need to adopt these, when you have a enough real ones. (:

Back to the dog.While he loves the attention his friend, Daria is giving him, he never likes to pose for pictures - as is obvious in this shot.

When I started writing this posts, I didn't think about all the dog memories that would flood back. So, I was a bit unprepared for the nostalgic puppy path this took me on, especially when I started trying to come up with a song to go along with this post. Many of the dog songs I found on You Tube are really sad - about people losing their dog and then making a tribute for them. I can relate, because I too have lost a dog - a cute poodle named, Nicki. he was a birthday present from a friend. I had him for quite a few years, but then he got very sick and didn't survive. Yes, very sad! In the end, I couldn't find a song for this post. (If you know of one, even a few lines from a song, I'd love to hear it and will consider adding it.)

Then I was also reminded about all the other dogs our family had over the years. My dad loved dogs, especially German Shepherds, so we grew up with furry friends and have many fond puppy memories. But unfortunately also some tragic ones, like Laddie who was hit by a car and died in a ditch. Silver was a German Shepherd who dad had to give away, because he was a watch dog who took his job too seriously. Beautiful dog, but not a good fit for our family at the time, my dad felt. So he gave him to someone at another colony, about 60 miles away, who happened to be looking for a watch dog. Dad never forgot how sad Silver looked when he left that colony, asking him to "Stay" - a command he understood all to well. My dad raised geese at the time and many times would ask Silver to stay at the pen overnight, in case any hungry predators came by.

Years later, dad ran into the man he had given Silver to and of course asked about him. He told him this incredible story: "You will not believe this, Jake. But one winter day around supper time we thought Silver was going crazy. He was outside, faced towards your colony and was howling something fierce for I don't know how long. We couldn't figure out what was up with him, but eventually he did stop. A few hours later, we learned that your home had burned down and you lost two sons."


If you have an interesting pet story, feel free to share it.....
Posted by Hutt-Write Voice