While I've posted many photos on here over the years, I want to try something different this year. Inspired in part by Katie Troyer and some Facebook Friends, I'll post at least weekly, a photo along with some thoughts to go along with it - a resolution of sorts. I'll also try to connect it in some way to a song. If I happen to find the song on You Tube, I will add the clip; if not, just the lyrics will have to do. I have no idea how that is going to go, but I do hope this venture turns out to be at least half as interesting and inspiring as those of similar posts I've seen. These posts will be under the heading, Snapshot Muse and will be numbered. By the end of the year I should have at least fifty-two, if I stick to it. If I'm really dedicated, there may even be a few more. If you ever need to find these posts, I'll have them labeled, 'Snapshot Muse'.  Here then is the first of hopefully, many more like it:

As I was mulling over this idea, for whatever reason, flying came to mind. Fortunately, I happened to be among the clouds a few times in the past year, so had some photo options to choose from for this muse. 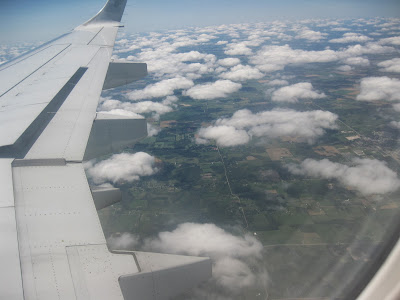 As most of you already know, I was in Europe last summer. (If you're new to this blog, then you can read all about that by clicking 'Europe Trip' in the tabs above this post.) I love to fly, especially the rush of take-off, and like to have a window seat. Even if there's not much to see once you're way up there, heading towards your destination. This picture was taken as we were leaving Winnipeg, heading for Toronto to catch a flight to Switzerland. I've only flown a few times, but I marvel each time that such a big machine with hundreds of passengers can stay up there for so many hours. Our flights to and from Europe was between 7-8 hours.

This picture also reminds me of a story one of the moms here at our colony told me once. On a flight from Manitoba to British Columbia with her son and daughter many years ago, as they were serving lunch, her daughter exclaimed, "Mom, we'll be having lunch here in the clouds today!" Yes, that is exciting, even as an adult!

My song for this post is, 'I'll Fly Away'. This is an old song and it always brings back mostly good memories of when I first started singing in our colony choir in my teens. Remember those days? Excited to be there, but at the same time worried that you'll never be able to learn your part. For me it was alto, and it literally took me years to feel really comfortable. Today, I sing soprano, but am grateful that I learned to sing the alto part early on.