We’re so grateful to have so many old and new friends, in Europe! They graciously host us and take time to show us various Hutterite History places and other scenic sites.


In Wien our hosts were Raphael and Anna Zyadeh, Alexander Basnar and Karl Amesbauer. Raphael was at the Silverwinds Colony for a few months earlier this year, and was eager to host Hutterites. And this he did with his own special flair, taking lots of time to prepare meals carefully and laid it out on the table till there was hardly room to move our plates – every meal ended up being a feast, with abundant amounts of local flavours, cooked to perfection. He in turn was grateful that we came, he thanked us for ‘die Hutterer Atmophaere' that we brought.
Alexander Basnar is part of the Hutterer Kreis and has done a splendid job of acquiring grants to set up galleries pertaining to our history. I continue to be amazed at how much time and effort these people take to tell the Hutterite story, and how passionate they are about it. The first Hutterer Gallery we visited was at the Museumsdorf Niedersulz. This village is sort of like Lower Fort Garry or Fort La Raine in Manitoba. Here, one of the houses is dedicated to Hutterites – it has artifacts, recordings, pictures and lots of information about our history, ensuring that people coming here, learn about what happened to our forefathers. Karl Amesbauer was also with us for this tour. He’s been involved with our history for many years as well.

The people who have been taking us to Hutterite historical sites these past 11 days, know more about our history than many Hutterites. I hope many more Hutterites can come here and see these places - it's amazing how history comes alive and the emotions this evokes, hard to describe at times. I know this trip has given me a renewed appreciation for our history! For that I am so grateful!

﻿﻿
Großschützen is a  village in western Slovakia in Malacky District in the Bratislava region. In the early 1990's the government started a partial restoration of these Habaner buildings. The Habaner, as the Hutterites in Slovakia were nicknamed, followed nonconformist Christian doctrine which, among other things, believed in adult baptism, as opposed to infant baptism - followers are also known as Anabaptists. In the religious turmoil of 16th- and 17th-century Europe this was seen as heresy and very often followers were severely persecuted. During this time, several groups left their original homes in Germany, some heading west to North America (where one group became known as the Amish); others went east, some ending up in the village of Veľké Leváre in Záhorie.


Thus, we visited Velke Levare in Slovakia. One part of this town has houses that Hutterites used to live in – it used to be a colony. As you can see, they have been remodeled (people still live in them) and don’t really look like old houses. What happened in these communities is that Catholic chapels were built right in the communities and Hutterites were forced with a whip to attend the services. Sometimes the children were forcefully taken from the parents and baptized. Quite something to walk these streets and think that it was a once a Hutterite community.
Here are some of the building: 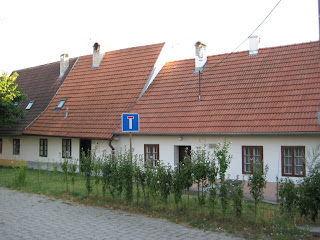 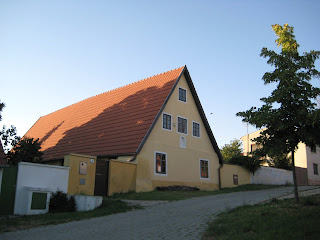 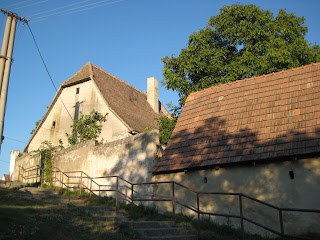