Remembering what our Forefathers Fought and Died for 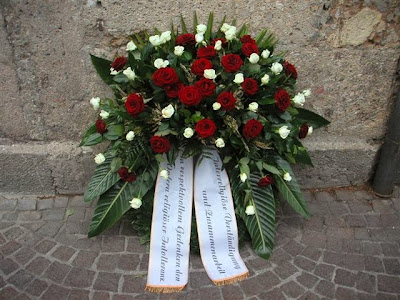 This is the speech Karl Amesbauer, from Vienna, Austria gave at Das Goldene Dachl in Innsbruck, on November 8, 2003, as this gorgeous wreath was placed at the Jakob Hutter memorial. I met Karl, when I was Europe this past August, and really appreciate getting to know him and that he took time to tour historical sites with us. I'm also grateful for all the work he and others do in creating awareness of the Anabaptist story, thus 'bringing light into a dark chapter of religious history in Austria'. 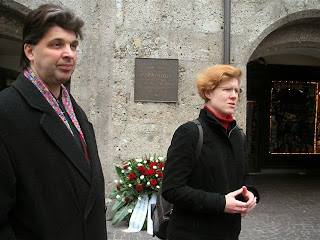 Thank you for attending today's wreath-laying ceremony. This is a special and significant occasion, whether there are ten or thousands in attendance.

The laying of this wreath is a symbolic gesture intended to bring light into a dark era of religious history in Austria. The wreath itself has a symbolic meaning: The green colour symbolizes the beauty of our country, Austria. The red roses symbolize the blood shed by Jakob Hutter, by the Hutterites and by all victims of religious intolerance. The white roses symbolize their Christian faith and their good intentions, their piety and their courage, which even their persecutors and executioners were compelled to acknowledge.

In essence, the Anabaptist movement, to which the Hutterites also belong, was a Christian reformation movement. The moderate life style and the active compassion it promoted became proverbial.

The suppression politics of Archduke Ferdinand I (1503-1564) were cruel and ruthless: he knew no mercy. To Ferdinand l belongs the dubious claim of having suffocated, in its own blood the Anabaptist movement in Tyrol.  In 1521, he gained the hereditary lands of Austria and Tyrol. To these Moravia was later added – the country to which many Hutterites had fled. Only eighteen years old at the time, Ferdinand had a traditional Spanish education. Knowing neither the language nor the culture of his subjects, and afire with exaggerated ideas of his personal power, he entered the home territory of the Habsburgs.

As a Habsburg, he burned with zeal for religious loyalty without any doubts about himself. He considered it his God-given task to preserve the Corpus Christianum and to extinguish heresies from the lands entrusted to him. For him, Anabaptism was a "damned, seductive, heretic sect" which he fought to destroy by means of his suppression campaign, resulting in the death an estimated 2000 Austrian Hutterites. If they did not revoke, men were beheaded or burned, sometimes both. Women were drowned. Regarding the children, concerted efforts were made to “bring them back to the right faith".

Dear Austrians! Our land is famous for its natural beauty. Many foreigners and tourists visit it. Since I became better acquainted with Austria’s religious history, however, I noticed one thing: We do not sufficiently value Austria’s spiritual heritage and achievements!

In this context, I want to highlight the "Interreligious Understanding and Cooperation" project, which organized and sponsored today’s commemorative ceremony. The IUC was initiated in Austria in an effort to foster respect and appreciation for every religion. With projects such as this, we hope to establish friendly relations and promote cooperation and enhanced spiritual achievements in our own country, Austria.

For this purpose, we recently added the page "Religions of Austria" to our website: www.religionen.at. Our website features, four religious movements and communities which originated in our land and are in the process of becoming worldwide movements, if they haven’t already.

Not one Hutterite family or colony - as they call their communities - exists in Austria today. Here "Religions from Austria" takes on a double meaning. Religions of Austria!

We could well ask ourselves: What might have happened if the Hutterites had not been persecuted and suppressed so violently? Imagine what Austria would look like today, if reformation had occurred through the Hutterites. They represented the third wing of the reformation. Already at that time, they took a stand for freedom of conscience, tolerance, peace and pacifism, separation of church and state, and for community of goods.

Although it is not efficacious to over extend this speculation, questions like this could help us create connections between the past and the present. We, human beings live, not only in the present, but also in the past and in the future.

We know how important it was and is to reconsider the holocaust and to work out that period in history. The history of religion deserves to be similarly reconsidered and re-examined. The past can help us cope successfully and effectively with the present, and if we understand the present we will have a better future.

Thank you for your attentiveness.
Here in German: http://www.religionen.at/irkranzniederlegung.htm 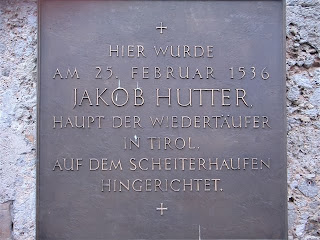 Jakob Hutter's memorial plaque. He was burned at the stake


right at this place on February the 25th, 1536. He had been elder
for only three years. His wife, Katrina was drowned two years later.﻿