An I-Love-To-Read Activity Inspired by a Reader 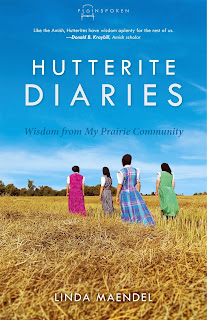 I don't know why I didn't think of this sooner... Oh well, my book Hutterite Diaries is still here and schools are still purchasing it. And those who've had it from the beginning, I rust, still enjoy it. What inspired this is: A colony school in the United States who were just introduced to my book are planning to encourage their students to write to me.

With I-Love-To-Read Month coming up, I thought I would share this idea with other schools, for a number of reasons: First, it's always nice to have a variety of ideas to get students to write, and writing to an author can be a fun activity. Furthermore, nowadays, as we all know, not too many letters are handwritten anymore, so I also want to encourage that lost art. (That said, I have nothing against email, so I'll respond to those letters as well.) Second, it's always interesting to hear which stories children connect with or which ones are their favourite. Finally, I always love to hear what readers have to say about my stories, especially children.

On that note, just before Christmas I read one of the stories to our Grades 3-5 students. The story I read was Sisterly Love-Laced with Revenge. It's a childhood Christmas memory where my sister and I played a trick on our little brother, James. As it worked out, one of the students I read the story to, was James' eight year old son, Jakobi, who didn't appreciate that we tricked his dad all those years ago. So he planned his own revenge on me. Days before Christmas he told me repeatedly, that he has a gift for me under the tree and "I just want to see your face when you open it." (A line he got from the story.) He ended with, "You had no business playing a trick on my dad."

Christmas Eve, is when my family usually does a gift exchange. Jakobi announced that I had to open his gift first. And he wanted someone to take a picture. His 'revenge gift' was in an old green gift bag, stapled together at the top. It wasn't one of those pretty Christmas gift bags, but one that came from some store years ago, but it did have a handle. I opened it, peered in and laughed. I’m not sure that this was the face Jakobi was looking for. The items in the bag were clearly not from his home, and certainly never belonged to him. There was a cute little doll and two used lip chaps, all of it 'borrowed' from my sister, Sonia, without consulting her first. I guess he didn't have an attic where he could go to in search of the perfect prank present, like I did.

Still, I found it sweet and amusing that he decided to practice some payback, on behalf of his dad. It certainly never crossed my mind as I was writing the story, that my nephew will one day feel compelled to teach me a lesson.

As mentioned before, I thought writing a letter would be a fun I-Love-To-Read activity for next month. I’ve had classes write letters to authors in the past, and it caused a lot of excitement when the authors wrote back.

Should you wish to do this with your students, individually or as a class, as I promised the school in the United States, I will respond back with a handwritten letter on nice stationery.